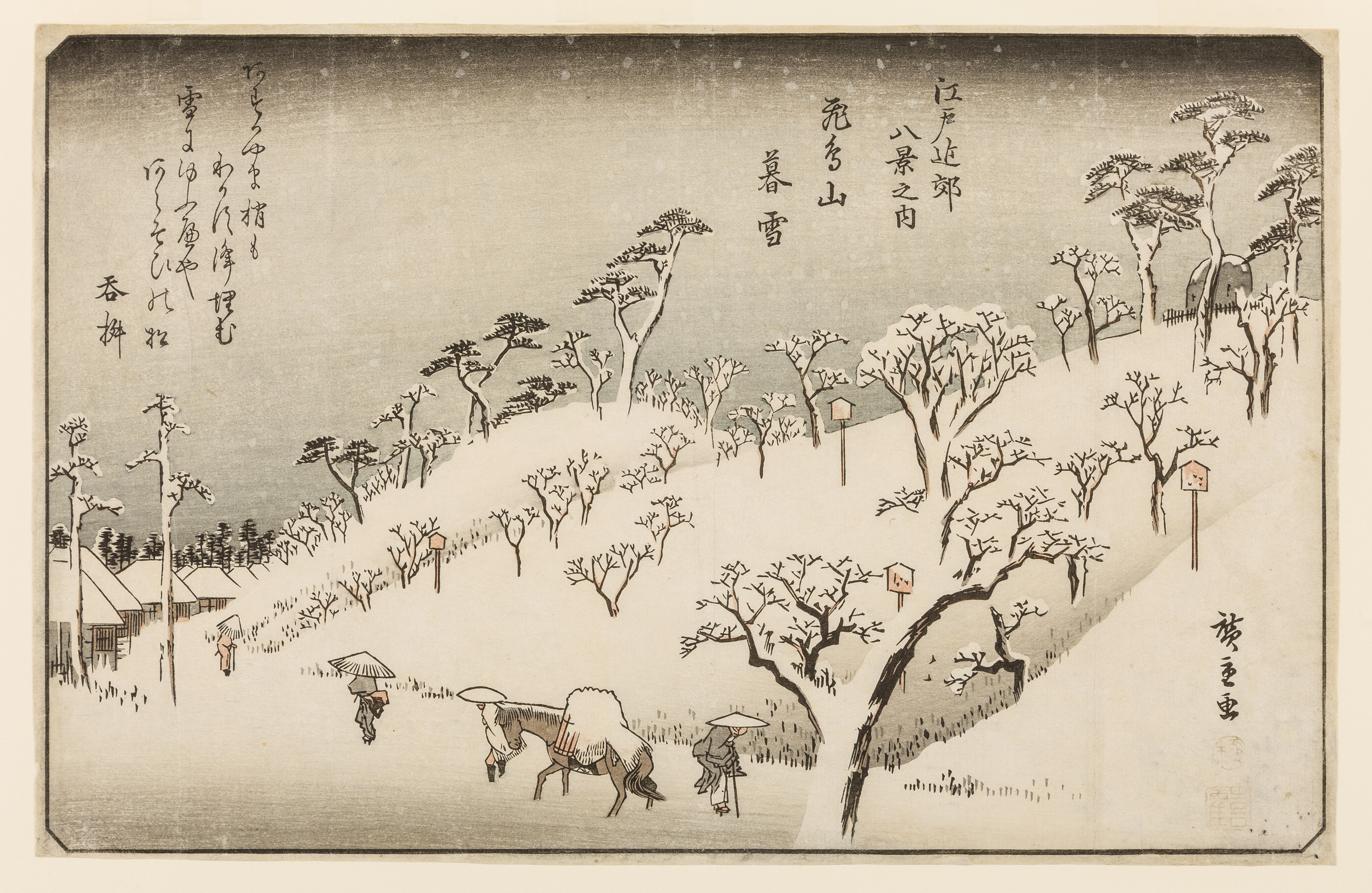 For many students, the EcoLeague offers an opportunity to conduct research or sharpen their focus within environmental studies. But anyone with a sense of curiosity and an appreciation for new natural spaces is welcome—and Leigh Rankin’s exchange story is a prime example of such self-discovery. While opening new doors and access to myriad faculty expertise, exchanges can also help to foster a strong sense of place. Rankin is pursuing studio art and art history, though she feels that confining her studies to these two subjects is “such an oversimplification.” Her drive to learn more in these areas took her from the close-knit atmosphere of her home institution College of the Atlantic (COA), a college on the coast of Maine with 350 students, to Dickinson College and its over 2,000-person student body near the mountains of Pennsylvania. For her, an exchange to Dickinson through the EcoLeague for the fall 2018 semester offered her valuable experience that she could find in few other places.

“Dickinson is the most, or to me what appeared to be the most, traditional of all the schools in the EcoLeague, and it has a well-established art history department,” she said. “I wanted to really make sure that this was something I’m interested in, and if I want to go on to grad school, is that [studying art history] something I really want?”

At Dickinson, Rankin took courses on a full breadth of topics in art–Japanese woodblock print, the Renaissance, and sculpture–along with a course called “Perception, Memory, and Thought” within the Psychology department. While the unique aspects of each class made it challenging for her to pick a single favorite, “Italian Renaissance Art 1250-1450” stood out.

“I especially love the professor [“Italian Renaissance Art” professor Melinda Schlitt] just because…she’s rigorous, and I wanted to be challenged, and my main priority upon coming here was to improve my writing, especially within the discipline of art history, and she’s been so wonderful in giving feedback and guiding me through the research process, so…I do love that!” Rankin explained. Rankin enjoyed her time at Dickinson, but her exchange also helped her clarify what she appreciates most about her home college of COA—her “community,” as she frequently calls it. She speaks enthusiastically of the school’s coastal location, highlighting the environmental interest that made the EcoLeague a perfect fit for her.

“Arcadia National Park is right there, and then you also have Frenchman Bay, which is linked to the Atlantic Ocean,” she described of COA’s signature biosphere. “So, you know, you’re right there, you’re on the water, you can go in the water, or you can go hiking. And I think that the longer I’m there, the more I love it, and the more reasons to love it.” 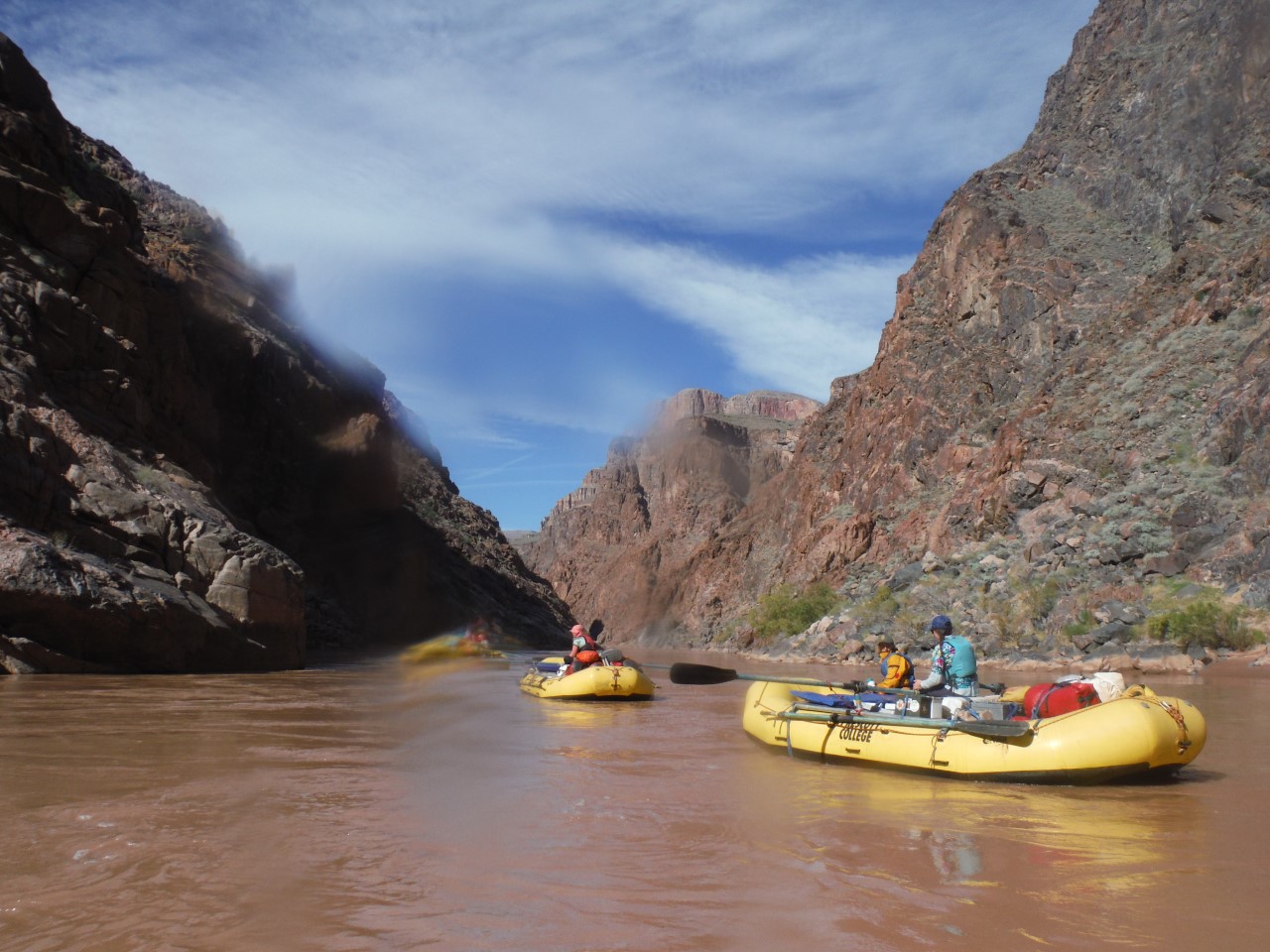 Katie Overstrum recently returned to Dickinson College from a Fall 2018 exchange to Prescott College, where she took part in the college’s distinctively immersive “Grand Canyon Semester“. Here, Katie shares how she first heard about EcoLeague during her freshman year, her experiences while spending two weeks in the field, and her possible future plans in research.

How did you get involved with EcoLeague? Participants in the Grand Canyon Semester gather by the riverside.

I’d heard of the EcoLeague when I applied to Dickinson, so when there was an info session freshman year, I decided to check it out. There were two EcoLeague alums there, and they LOVED it. From then on, I knew that it was something I wanted to do, I just had to decide which school I wanted to go to and when would work best.

Why did you choose to study at Prescott?

I chose Prescott particularly for the field semester called “A Grand Canyon Semester.” And it was INCREDIBLE. All 16 of us took the same suite of 4 classes, allowing us to travel around the entire Grand Canyon region as we did so, by van, foot, and boat.

What kinds of academic work or research did you do on exchange?

My field semester consisted of four courses–Expeditionary Travel for Rivers and Canyons; Landscape Ecology; Cultural Geography of the Grand Canyon; and Teaching, Research, and Resource Stewardship on Public Lands. So, I did lots of different work across different disciplines, from learning to row an 18 foot oar rig on the Colorado River to writing and presenting in a research symposium on the distribution of Ponderosa Pine across the Southern Colorado Plateau. A sunrise stretches over the Grand Canyon.

What was being in the natural environment at Prescott like compared to Dickinson?

I’ve spent a lot of time at Dickinson in the classroom learning. Labs have been a great chance to get outside and experience things, but they only last 3 hours. At Prescott, we would sometimes spend over two weeks in the field! This gave me the chance to learn through experience on a day-to-day basis, instead of just two or three times a week. It also meant that learning didn’t stop when the school day was over. Having peers and professors on hand 24/7 meant that we could ID plants early in the morning or discuss the rock layers of the Grand Canyon over dinner. A snapshot of one of the many outdoor “classrooms” Katie Overstrum learned in over the course of her semester in the Grand Canyon.

Have your EcoLeague experiences helped you prepare for your current academic or other work? How so? Any future plans?

Participating in the EcoLeague helped to round out my academic experiences in college. I had the chance to apply my Environmental Science studies in a new ecosystem, as well as an opportunity to do research with a local ecologist in Flagstaff. Though I still don’t know what I want to do, I’ve been thinking about working in education or research after college, so this program was definitely helpful, especially the course “Teaching, Research, and Resource Stewardship on Public Lands.”

What advice do you have for other students interested in EcoLeague?

If you’re considering the EcoLeague, I’d really recommend a field course or semester. Time in the field gives you a special connection to your classmates, as well as an incredible chance to experience the things you’re learning about and the place you’re studying in. 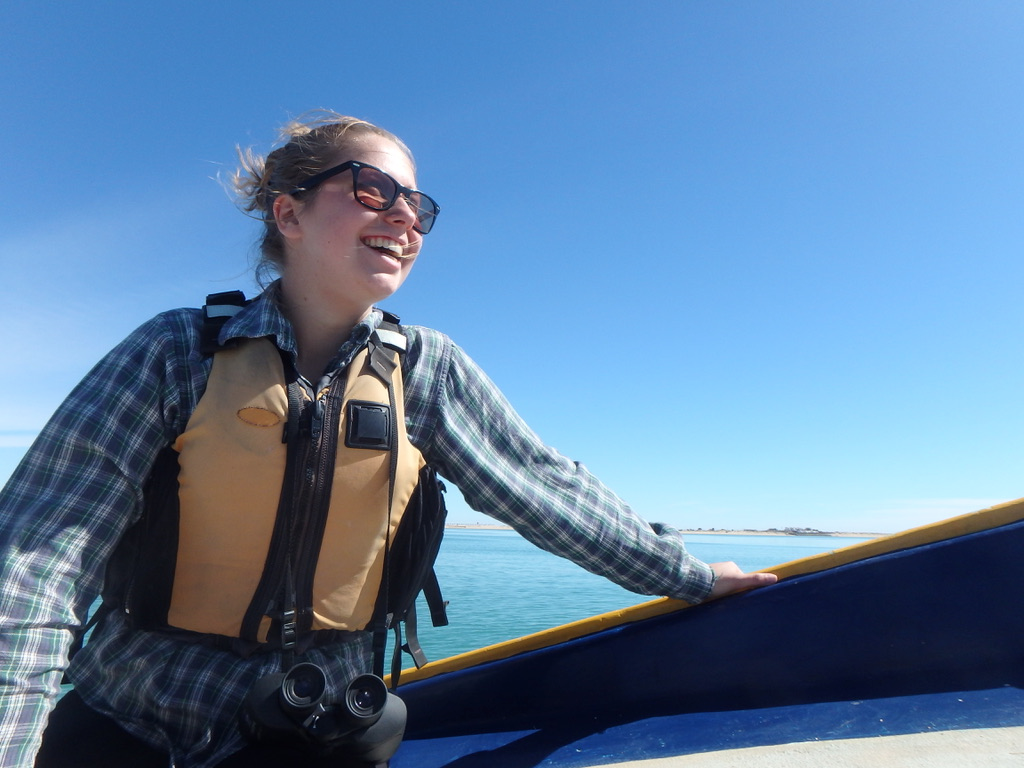 Heather Sieger, a College of the Atlantic student, looks out over the water while on her EcoLeague exchange.

You never know what’ll push you to apply for a program like the EcoLeague. Sometimes, you’ll feel the tug of a friend’s influence; other times, a transformative experience points the way. For EcoLeague alumna Heather Sieger, who used her exchange to travel from her home school College of the Atlantic to Prescott College, it was both.

“[In] my second year at COA [College of the Atlantic], I did a SEA Semester program in the South Pacific, and when I came back, I was really hoping to go on some more adventures in my time here,” Sieger recounted. “And then one of my really close friends told me that she was thinking about going to Prescott for their Kino Bay program in Mexico…it was like, ‘Yeah, that’s what I want to do!’”

The Kino Bay Center for Cultural and Ecological Studies that Sieger studied through is a Prescott field station on the Gulf of California in Mexico. Besides the marine biology track which she chose, it also offers experiences in marine studies and conservation—“They’re all things that I would love to do,” she quipped. For Sieger, who’s held an interest in marine biology since participating in the semester program, Coastal Studies for Girls in high school, the center was a great fit.

In all, Sieger spent just three weeks at Prescott, with the college’s academic block system allowing her the chance to focus her time at the Kino Bay research site. In between classes like “Diversity of Life” and “Oceanography,” she took on an independent field research project.

“We had been finding this little crab all semester and we couldn’t identify it, and our professor couldn’t identify it either…It wasn’t in any of the field guides or anything, which is really crazy, and so that’s what I ended up doing my project on, was ‘What is this?’ and ‘What can we learn about it from watching it and collecting them and looking at them and when can you find them and what times of day are they active?’” Sieger and other students reached out to researchers, and she is now working on a paper about the basic field ecology of the species. Making aquatic discoveries in the waters of Kino Bay.

Sieger wasn’t only making discoveries about this little-known crab, which takes the scientific name Leucosilia jurinei, but about the environment of Mexico and the southwest United States. The distinctive biomes represented at each of the EcoLeague member colleges gave her the opportunity to study tropical and coastal marine life over the course of her college career. To go from the tide pools of Maine to the deserts of Arizona was a great shift—“just polar opposites,” she called it.

“It was really crazy being in the Sonoran Desert, where you’re right on the coast, right next to the ocean, but it was a desert,” Sieger said. “So we were dry, which is something I’ve never experienced, being here in Maine, and our campus is right on the ocean, so it always feels so humid.”

Sieger has since returned to COA to finish out her senior year, and now is trying to re-acclimate to Maine weather—a recent weekend snorkeling trip reminded her of the differences between the waters of her home campus and Kino Bay. But what has stayed the same across geography is her love for her field, which her experiences in the EcoLeague only strengthened.

“[I’m] doing a project about marine biology and hoping to publish another paper by the end of my senior project,” Sieger elaborated. “I think [EcoLeague] definitely influenced what I’m doing now, and what I think that I might do in my life.”